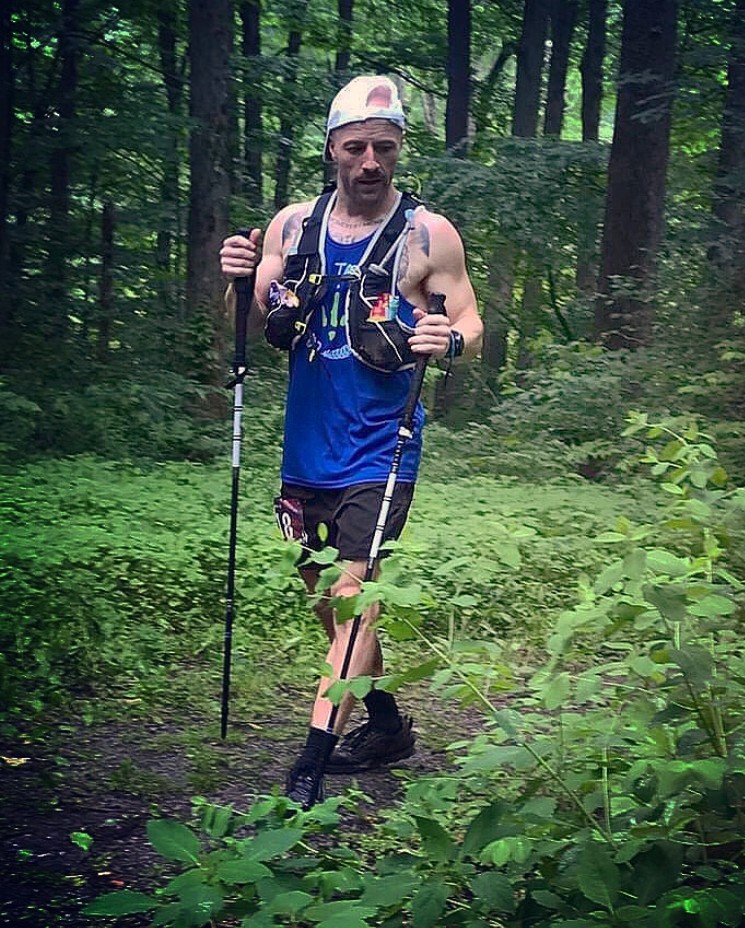 My name is Travis Helsel and the sport of my choosing is running, trail running to be exact. My trail running journey began approximately four years ago, being inspired by a book called “Can’t Hurt Me” by David Goggins. A book about his journey from a rough upbringing to breaking down barriers of self-doubt and reaching the highest levels in the military, until finding his passion later in life which turned out to be ultra-running. Goggins is one of the best distance runners alive today. His book inspired me to find out what I am capable of and to find more of the greatness that is within us all.

My nerves were high, knowing my last race did not go exactly to plan. In a race of these distances, they rarely do. My concern was taking in enough calories and water per hour. Typically, during an ultra-marathon, a runner is to take in 200-300 calories per hour.

On Friday March 25th at midnight the Greenbrier Ultra was scheduled. I was to do 7 loops of a 7.25-mile course in Greenbrier State Park in Hagerstown, Maryland. This will be my 4th 50-mile race. My last race, the Tussey Mountainback 50. I did not perform well due to fueling and hydration issues from lack of experience during big races. This led me to reevaluate and apply what I learned to my latest race.

The race began with 60 participants, and I was thrilled to be one of them. My training leading up to the race consisted of 60–80-mile training weeks, so I knew I was well prepared. The first 30 miles were done by the light of my head lamp, which I was used to considering I had done many night runs. At approximately 7 am, one of my close friends joined me as a pacer for the rest of the race. A pacer is there to alleviate some of the stresses brought on by running alone for the previous 8 hours. As we ran, we talked about how lucky we both were to be experiencing this journey together.

The miles ticked by, and I began to feel better about how this race was playing out. We were on the final lap of 7 and I decided to give it all I had. As I picked up speed, I passed runner after runner until the final climb. I threw caution into the wind, knowing I only had two miles left. I crossed the finish line in just over 13 hours, which was good enough for 16th place.

The experience was one that my friend and I will always remember, and I can apply the knowledge I learned to my future races.

About the author: Travis is a sales associate at AppRunCo Altoona. He’s a mountain climber / weight lifter turned ultra runner. When he’s not working out or running, he spends time hiking and playing golf with friends.

Are You Eating to Maximize Performance?

How to Love Cold Weather Running