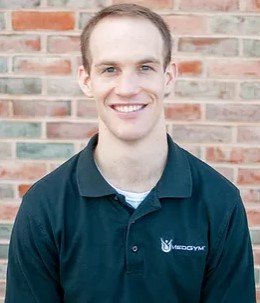 In my college days, I began studying the science and practice of exercise training.

I not only studied it by the book; I also started to make practical observations from my training routine as a college baseball player. And I observed people around me training in the gym each week.

As the great Yankee catcher, Yogi Berra once said (in one of his famously funny quotes):

You can observe a lot just by watching.

One observation I made was the dichotomy in training between us baseball players and the track and cross-country athletes. We would see each other in the gym, but our training routines were strikingly different.

As baseball players, we were concerned with training for strength, power, speed, and size. We wanted to get bigger, throw harder, hit harder, and run faster. To do this, we focused on squatting and deadlifting near maximal weights (and trying to get out of the long-distance running our coaches told us to do:)).

On the other hand, the runners (in particular, the long-distance runners) training routines focused on endurance. Whether in the weight room, on the track, or running around campus, everything they did was about maximizing endurance.

My textbooks included tables of recommended repetitions for a given exercise. These tables identified how many repetitions to perform for strength, power, hypertrophy, and endurance:

And that’s what they did.

However, I have found a few problems with this theory of training.

For example, as a former baseball player, I know some people who think of sport-specific baseball training as only performing exercises for the throwing shoulder and performing resisted repetitions of swinging the bat or throwing the ball.

The main problem is that baseball players get thousands of repetitions of these sport-specific activities through regular practice and games. If you repetitively train the same movements in the gym, you are not building strength and resilience; you are potentially overworking some areas of the body and neglecting others.

So, instead of doing that “sport-specific” training (by repeating all of the movements of your sport with some resistance in the gym), you will be better off getting generally strong and more athletic with foundational strength exercises. After that, you can work on weaknesses and perform movements complementary to those performed during your sport.

The other goal of a good training program should be to assess the problems caused by the demands of your sport and the repetitive movements involved. That way, instead of reinforcing these problems during training, you can work on correcting them.

This approach applies to training for every sport. You first train to get strong and athletic. Then, analyze the demands of the sport, not to mimic them in the gym, but to complement them. You work on weaknesses and avoid overuse.

So, how does this work for runners?

First, understand that functional strength training plays a part in your performance and injury prevention.

Too often, a quality strength training program gets undervalued in this population.

For runners, the answer to how we can protect you from injury and maximize performance is not simply more running. You already get plenty of this in your training.

It’s also not a matter of performing endurance-oriented strength exercises, as twenty repetitions of loaded squats will only add to the repetitive strain placed on your body.

Instead, the answer is a paradigm shift in how runners train and what it means to perform sport-specific training. Rather than replicating the movements and energy demands needed in the sport, strength training in the gym should focus on improving weaknesses, building strength and resilience, and maximizing movement quality.

So how should runners train in the gym?

The focus for training when it comes to long-distance runners should be:

All of the above are goals that should be the focus for runners when training in the gym, but how can we reach these goals?

Firstly, for runners who have been training for a while, there is not likely to be much increase in maximal oxygen consumption (VO2 max), or lactate threshold, by simply adding strength training to their current routine.

To define these – VO2 max is an indicator of the overall capacity of the cardiovascular system to take in and utilize oxygen during exercise. A higher VO2 max is advantageous for endurance athletes because they can run for longer at higher speeds while still delivering much-needed oxygen to the muscles.

For someone who is sedentary, strength training will increase VO2 max, but not so much for a trained endurance athlete.

This increased acidity causes the muscular fatigue associated with high-intensity exercise (commonly referred to as lactic acid in the muscles). But if you can improve your lactate threshold, you can increase your exercise intensity without suffering the negative consequences of fatigue and muscle burn. You will use oxygen to produce energy at faster running speeds rather than relying on anaerobic energy production to keep you going.

As I said, you are unlikely to increase VO2 max and lactate Threshold by adding strength training if you have already been training as a runner for a long time.

However, what you can improve in the gym is running economy.

Simply put, running economy is the ability to run at faster speeds while consuming the same amount of oxygen. In other words, you can increase your running speed while leaving VO2 max and lactate threshold levels unchanged – a huge advantage!

The only question now is: how does one increase their running economy?

All these factors allow each stride and push-off during the race to be more efficient and powerful, allowing the runner to increase running speed while conserving energy.

Going back to my point near the beginning, you can’t improve these factors very much by training with low-intensity, high-repetition exercises. Strength training with an endurance focus may even have the opposite effect by decreasing muscular power and rate of force development.

The answer, then, is to perform sets of strength and power exercises at a higher intensity with low volume. You do not have to max out all your strength exercises. However, training with higher resistance and lower volume will train force and power development in the muscles, which improves running economy.

So, if you want to improve your running economy, get with a coach or a friend who has experience in strength training and learn how to properly:

Begin with light resistance. Once you have the technique down, start dropping the reps down for strength and power development.

I like sets in the 2-4 range with repetitions in the 2-6 range for heavier strength exercises (like barbell deadlifts, squats, and bench presses). Reps in the 6-10 range work well for single-leg and single-arm exercises.

But do not be afraid to progress!

Once you start practicing strength and power training, you will likely find that you are a lot stronger in your running.

Want to speak with a Med Gym coach about your training routine? You can sit down for a free success session with one of our coaches to discuss your current exercise routine and game plan what you may be able to improve upon.

Good Things Come to Those Who Wait